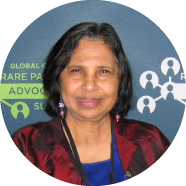 My name is Tara and I was born in a rural village in a small country in South America. I am of East Indian origin and have six siblings. Five out of the seven of us have GNE Myopathy also known as Hereditary Inclusion Body Myopathy two siblings are unaffected.  I feel very fortunate that all seven of us did not have to experience the “wrath and ravages” of this debilitating disease.

As a teenager growing up in my big family, I noticed my eldest sister started walking in an unusual way (a waddling kind of gait).  At that time, we thought it was because she had just given birth to her first child.  As time progressed, however, we noticed that she avoided coming to our home, which was about one mile from her home.  She used to walk almost daily to visit us and bring me detective magazines to read.  I always looked forward to her visits.   Sadly to say, we thought that she had become “lazy” and did not want to walk the mile to visit us. Decades later we now understand why she avoided visiting us.

During the late sixties, significant political unrest developed in this country.  Besides, no proper medical facilities existed to diagnose my sister, and thus she went undiagnosed.  It was not until fifteen years later when my second sister acquired the same “waddling” gait pattern that she was able to get a diagnosis of Limb Girdle Muscular Dystrophy (LGMD).  Since I was not living in the same country as they were, it was quite difficult to understand what really was going on with them, and how the progression of this disease was manifesting.  Nevertheless, I decided to get myself examined by a neurologist but the tests for LGMD came back inconclusive.

As the years went by, this pattern of “waddling” gait continued for yet another sister, then my only brother, and eventually me.  Some of my siblings started showing symptoms in their mid-twenties and some in their mid-thirties.  My symptoms started in my late thirties, which caused me to stop working due to progressive muscle weakness.  Since then I have devoted my time to adaptive exercises, and pursuing doctors, and researchers to get a definitive diagnosis.

One research hospital had my biopsy taken and sent samples of my muscle fibers to various research institutions and, as new tests became available, they would test a fiber from my muscle to see if it would be positive for one or another subtype of LGMD. Still, my muscle fiber failed many tests for LGMD.  In 2009 another group of researchers from Children’s Hospital in Boston decided to include my family in one of their LGMD studies. About a year later I received a call from a doctor from the Children's Hospital in Boston.  She said “I have news for you.” There was a long sigh on my side with my thoughts travelling at lightning speed.  What will she tell me? She said “your family does not have LGMD but a disease known as Nonaka Myopathy”.  At that instance, I was thinking Nonaka sounds like a Japanese name; and Myopathy relates to muscle.  She then explained to me what Nonaka Myopathy was, and that it is called by different names e.g. HIBM, Distal Myopathy with Rimmed Vacuoles (DMRV), and GNE Myopathy.

Finally, after forty years we have a disease with a name GNE Myopathy,  and not some unknown subtype.  I felt such an enormous relief, a kind of freedom it was as if I could fly as freely as a butterfly. For some reason, towards the end of my conversation with her I stated, “I am glad we have HIBM.” In many aspects I feel very fortunate.  The most immediate benefit was that my family and I have finally gotten a definitive diagnosis. What ails us has been given a name and we can now attempt to learn all about this disease.  The team member also referred me to some people, and related resources.

One of those people I contacted was Dr. Daniel Darvish.  I called his office and he answered the phone, I told him that I just found out that I have HIBM. He was very patient and empathetic to me.  He answered my questions and told me about the progress that has been made with GNE Myopathy research.   I am unable to express in words how I felt talking to Dr. Darvish that day. After I finished talking to him, I felt very hopeful that a cure will most likely be available in my lifetime. I have connected with someone who not only is a doctor who has GNE Myopathy but, most importantly, understands what the challenges are to those who suffer from this disease..

Since that memorable day in June 2010, I have met many individuals with GNE Myopathy and researchers who are studying our disease.  I have participated in a some clinical trials. I continue to look for possibilities, the possibility that we can have a cure, whether it would be from stem cells, a substrate, or from gene therapy.I think an effective therapy would not only stop the progression of GNE Myopathy but restore or regenerate the affected muscles. This seems like a daunting and almost impossible task nevertheless, it is comforting to know there are dedicated efforts by various entities to bring a cure to patients.

My parents have lived through our declining function, our sorrows, tears, thwarted aspirations, and our disappointment in us not being able to help them in their old age. My father who recently passed was a priest and had high hopes that his only son would continue in his footsteps and carry on the family name as is customary in our culture.   Well, that may not happen, or could it? They have always kept a positive outlook, and have continued to help us and they do so with grace, love, and enduring empathy. My current focus is to stop the progression of my ever-failing muscles, and to help in ways that I can to facilitate a cure not only for me and others with the disease now, but for all future generations.

Learn more about Tara and GNE Myopathy on her blog, here.